Chua Jett Yong, Singapore (the Republic of Singapore) is an island in Southeast Asia. 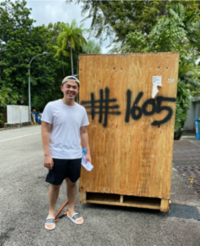 Seek Opportunity: Jett realized no one was doing offset smoking BBQ in Singapore. He already had cooking experience and wanted to create the authentic Texas BBQ taste. And with COVID-19 bringing the world to a standstill, he thought it would be a great way “to spread the love.”

Curiosity: Long before getting into barbeque, Jett had been cooking actively from the young age of 10.  He was always curious about different cooking techniques. He cooked Italian (pastas and pizzas) and some wok-styled Chinese foods—experimentation helps!

Difficulty:  Fire management is the most difficult thing to master. How to get the temperature consistent throughout the cook. The easiest way is to get a huge fire going with small splits in order to build a charcoal bed. Then put in beer can sized logs. It will slowly smoke away.

Research: Business takes a lot more than cooking. Even cooking on the finest smoker, a Lang, isn’t enough. You have to have a solid plan for your business. There’s a lot of details and requirements to meet regardless of what country or city you’re in.

Belief: Even if you have everything in place, without passion and belief in what you’re doing, success will be limited. The big business question is: Why do I want to do this and am I willing to go all out?

Being Different Helps: Robbie has been cooking barbeque for friends and family and decided it was time to make a move. That was the beginning of building a barbeque business in the whole hog tradition. Robbie was the first in his area to serve all wood-fired beef. That’s one of the factors that makes his business unique for customers. The flavor profile, as Ben Lang calls it, is what draws customers to his food trailer, a rolling barbecue restaurant. 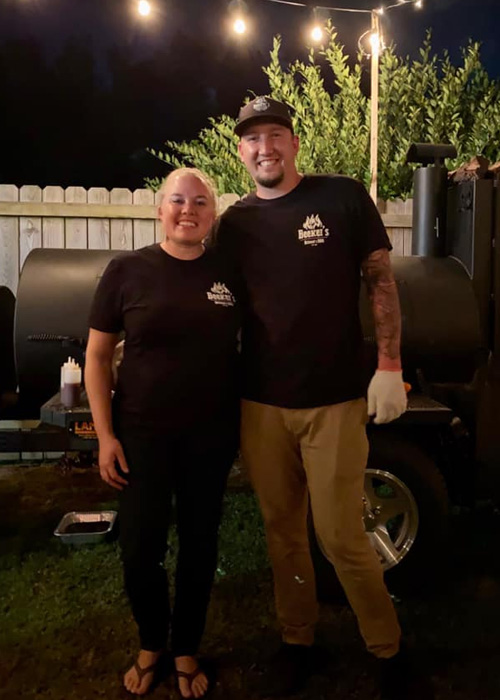 Challenge: Starting out, he faced the variables he could not control wind, rain, locating properly seasoned wood. But adding a new trailer, weather was no longer an issue.”

Getting Started: At first, he was regularly cooking barbeque for family and friends. Before long, they started saying, “You should really start selling this.” With that, he began taking small orders from friends and family.

It’s About Quality: Shortly after he started, word of mouth really spread, and he was getting phone calls from strangers asking him to cook. Soon, it was too much for his little smoker. He couldn’t keep up.

The Right Stuff:  Robbie did a ton of research looking for the best smoker he could possibly find. In his research, Robbie came across Lang Smokers. That was the only way forward.

Grow: You have to constantly learn and improve. Barbeque can be taken in so many different directions; so never stop learning. And you get to try great meat prep and ideas with the Lang Reverse Flow System. That really gives the meat a double portion of flavor. The sizzle of the juices hitting the reverse flow pan adds extra flavor to the meat.

Start Up: Cecil Abels III, started smoking back in 2005 when his dad opened a little restaurant/music hall in the small town of Carrollton, MS.  To their advantage, they used their current Lang 84D as the entire engine for the restaurant. “So, with Lang and experience, we were off and running.” 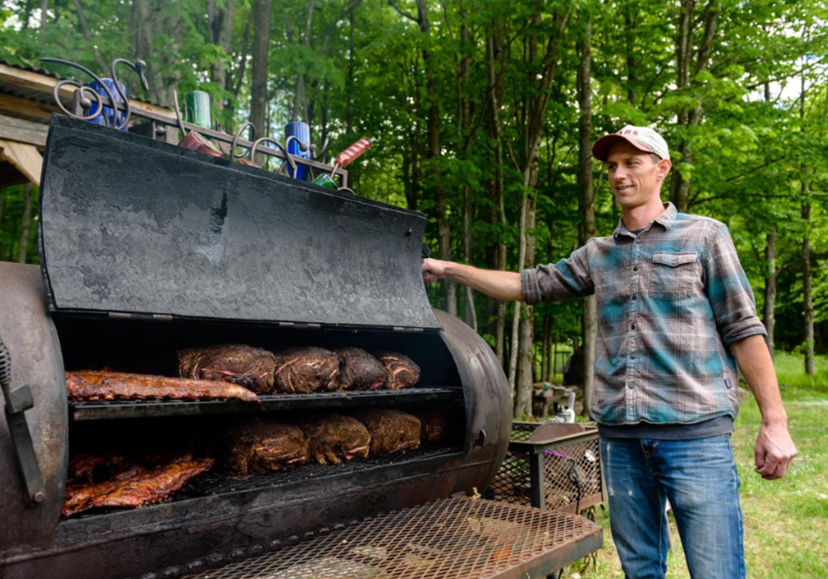 Uniqueness: In our area there are very few all wood powered smokehouses, and while some claim to use hickory, he guesses that most just use oak.  He uses oak and maple for the fire base and uses shagbark hickory (which grows locally) for infusing flavor. You have to know what opportunities are not being met.

Challenges: Managing rising costs across all fronts and staying on top of everything that goes into running a restaurant is now number one. But it’s always number one, really.  Cecil started out as more front of house and general management, so the kitchen/back of house, has been challenging.

Find a Way: Starting out as a ghost kitchen catering business, he finally decided to take the leap to try and open his own restaurant in 2018.  After tons of planning, working with local business advisors and colleagues, he opened a ghost kitchen take-out operation in late spring 2022 after Covid killed his financing for a food truck.  He kept scouring for the right location and was able to finally procure the funds to launch a brick and mortar. Stay flexible.

Unexpected Pitfalls: The one thing that took him by surprise was some of the animosity from the only barbeque competition in town.  He was uncertain as to whether it came directly from the owners, but many townsfolk were quite opinionated and derogatory towards their opening for business.

Unfulfilled Opportunities: One other pitfall would be New England’s familiarity, or unfamiliarity with professional with barbeque.  For a long time, barbeque meant backyard burgers and hotdogs, so the appreciation for what Cecil provides wasn’t always understood.  They now have built-up some diehard fans, but it’s taking longer than expected to build a customer base, which along with the rising cost of goods and materials (their building needed/needs some upgrades) has slowed down some of the growth projects and adding additional staff like he hoped to be doing already.

Getting Into the BBQ Business:  It helps to have experience running a restaurant or some kind of business, and plan, plan, plan!  Crunch your numbers, have a local SBA advisor review and critique, know how hard staffing will be in your area. You have to be realistic about how many hours it’s going to take.  Details, certificates, licensing, and other requirements have to be in order. You must have the love and passion for it, it’s no get rich quick scheme.

Driving Force:  It helps if you’re already cooking and people are telling you to start a business of it. Brad was cooking barbeque for over 30 years. He started out with a $30 Kmart water smoker- cheap and flimsy, but he made great ribs! 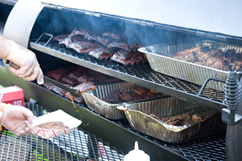 Something Special: Brad traveled all around the US from 1980-1992 as a merchandise manager for major rock bands. He ate barbeque in every town in America, probably 1,000 restaurants and dives. He created his own rubs based on his favorite flavors from that time, and they have proven very popular with his customers. Something you offer has to be unique or unusual in some way to separate you from others.

Starting Out: It began as a barbeque catering business in 2011 with his first Lang, an 84 Deluxe with chargrill. He had to abandon the business in 2013 when he went through kidney cancer and lost his left kidney. He retired in 2014, and by 2015 his wife wanted him out of the house. And with her encouragement he started Hubba’s.

Productivity: Brad runs a 2-person operation in a 16 -foot cargo trailer converted to a commercial kitchen. He only opens Wed thru Sat, 16 hours a week, beginning of May to end of September. The menu is very limited- 4 meats and 3 sides. They only sell what Brad is best at making. This will be a shock to some people but in the off season he’s a vegetarian. No meat for 7 months out of the year because he eats so much meat during the season. Don’t think there are many vegetarian pit masters out there.

New to the Business?  First, location, location, location! Whether it’s real estate or restaurants, you need a terrific location. They are fortunate enough to be in the parking lot of a florists surrounded by 5 high tech buildings filled with young employees who love barbeque for lunch. Second, test your recipes with neighbors, the police station, and the fire department (they love free food) and get their feedback- you want people to love your food. Third, keep your menu limited- don’t try to cook everything for everybody. Do what you do best. If you expand your menu too quickly or too much, you will find you have too much money invested in inventory. Then that money is going in the trash as unsold food at the end of the day.