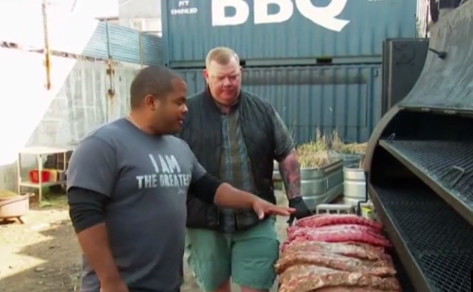 Billy Durney, the Pitmaster and partner of Hometown Bar-B-Que in Red Hook, Brooklyn talks  about using one of his 108 Lang BBQ Smokers.

WARNING: Make sure you are NOT hungry when you watch this video!

He gives some interesting fire tips. They stack their kindle and wood crosshatch and add in some cardboard that has been soaked with brisket fat, and recycle the wax paper that the brisket were wrapped in. The cardboard and wax paper get the fire hot fast and adds a season to the white oak that they use. (Hometown Bar-B-Que gets a A+ in innovative fire starting and recycling!)

It might seem unusual to have great barbecue in Brooklyn but Billy explains that he was inspired and influenced by traditional barbecue and all the local Korean, Vietnamese, and Caribbean cuisine. The video also highlights two of his barbecue dishes Korean Ribs and Caribbean Jerk Babyback Ribs. You have to see it to believe it – or better yet you have to get yourself to Brooklyn and taste them!!!!

More about the 108 Lang BBQ Smoker