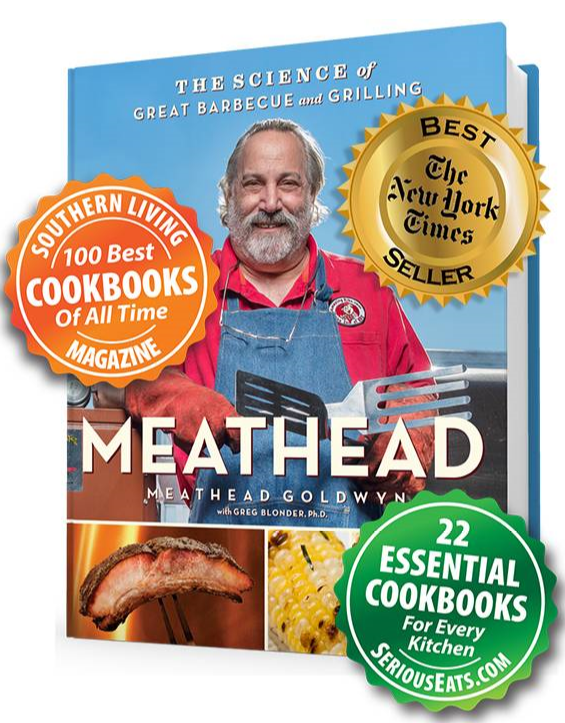 Meathead is the barbecue whisperer who founded AmazingRibs.com, by far the world’s most popular outdoor cooking website. He is also the author of “Meathead, The Science of Great Barbecue and Grilling”, a New York Times Best Seller that was also named one of the “100 Best Cookbooks of All Time” by Southern Living magazine. This article was excerpted and modified from his book by Meathead just for us.

Foods are composed mainly of water, protein, fat, and carbohydrates, with trace amounts of minerals and other compounds. Cooking is the process of changing the chemistry of food —usually by transferring energy to the food — so that it becomes safer to eat, more digestible, and to improve its flavor, texture, juiciness, appearance, and nutrition.

When you cook outdoors, energy is transferred to food in three different ways: conduction, convection, and radiation.

Conduction heat is when your lover’s body is pressed against yours. This is when energy gets transferred to food by direct contact with the heat source. Think of cooking a hot dog in a

frying pan. Heat from the burner is transferred to the pan. The molecules in the pan vibrate and pass the heat on to the wiener where it makes contact with the pan. As the surface of the meat gets hotter, the heat transfers to the center through the moisture and fats in the meat.

That’s also conduction. On a grill, the grill grates transfer energy by conduction.

Convection heat is when your lover blows in your ear. This is when energy is carried to food

by air, water, or oil. If you boil a hot dog, you are cooking with convection heat. If you cook the

hot dog in your kitchen oven, where it is surrounded by hot air, that’s also convection cooking. A convection oven comes equipped with a fan to speed up the natural airflow, increasing the heat transfer and cooking many foods 25 to 30 percent faster than it would cook without the fan. If you put your hot dog on one side of your grill but only heat up the other side of the grill, that, too, is convection cooking, as the natural airflow inside the grill conveys heat to the wiener.

Radiant heat is when you feel the heat of your lover’s body under the covers without touching. Radiant heat is the heat on your skin from the sun or from a space heater. Put a hot dog on a stick and hold it to the side of a campfire, and you are cooking with direct infrared radiation (IR).

The difference between heat and energy

We often talk about the heat produced by a grill and brag “my Big Green Avocado can get up to 600°F.” Well that’s convection air temp. But when it comes to searing a steak it just doesn’t matter. Searing is the process of browning the surface and creating rich flavorful molecules with a process called the Maillard reaction. Searing is for flavor (it doesn’t seal in juices and if you don’t believe click here and read this).

Why doesn’t air temp matter when it comes to searing? Because searing needs lots of energy, and air just doesn’t hold and deliver that much.

Do this experiment: Turn your oven on to 225°F. When it is up to temp, open the door and put your arm in. You can actually do this and hold it in there for a bit. Now touch the metal side. When you get back from the hospital you will understand that 225°F metal delivers much more energy than 225°F air.

On the second grill, we have charcoal spread evenly across the bottom and the air temperature on both sides is also 325°F. Let’s put a turkey on this grill, too. By the time the turkey is cooked to the proper internal temperature, it will be blacker than a mourning hat on the outside. Why?

The air temperature of both ovens (remember, a grill is really just another kind of oven) was 325°F, but the IR radiant heat from below on the second grill, burned the bird. IR delivers more energy more quickly than convection air (but not as fast as conduction).

Infrared waves are a part of the continuum of energy waves that surround us at all times, just up the road from visible light and down the road from radio waves.

Infrared waves excel at creating the dark brown surfaces we crave on food. In the past few years, gas grill manufacturers have added special burners that emit concentrated infrared. They are sometimes called infrared burners, IR burners, sear burners, or sizzle zones, and they are better at getting a good dark sear on steaks and crisping poultry skin. But as with the turkey, sometimes you don’t want IR.

The distance from a radiant energy source is another important factor. Energy dissipates and spreads out as it moves away from the source. In an $800 Big Green Avocado, the charcoal may be 18 inches from the cooking surface, while on a $100 hibachi, the charcoal is only 2 inches. A steak on the expensive kamado’s cooking surface will not brown as well as one on a hibachi because the coals emitting IR heat are farther away.

So, as you can see, air temp is crucial when smoking, but it can be misleading when it comes to searing.

For more on this, visit AmazingRibs.com and take a free 30 day trial membership in our Pitmaster Club.