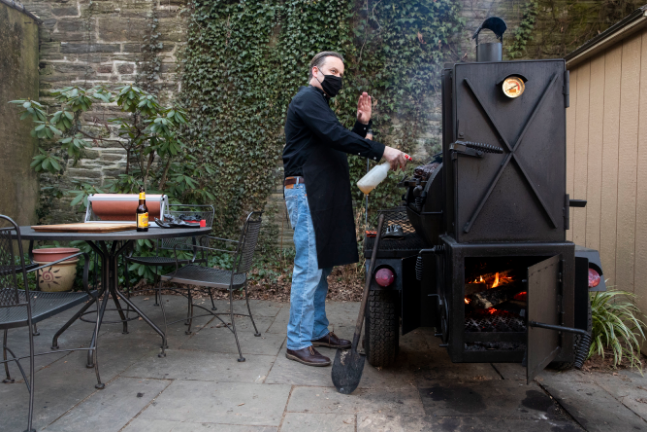 The line between an amateur’s passion and professional aspirations can get pretty blurry inside the fragrant cloud that hovers around a smoker at midnight. And R. Scott Hanson is hardly the first homesick Texan to find solace by taking the pepper-encrusted bark of a big brisket into his own hands. But Hanson, 52, who claims Austin as home, is at that transitional moment.

As he ramps up the oak fires of his pit boss dreams for the Sunday, March 21 debut of his weekly NXTX Tex-Mex BBQ pop-up takeout series at Cadence Restaurant, it’s worth pondering how this history and social justice professor arrived on the precipice of a new career.

“If I have to choose between the two, I’m still uncertain to tell you the truth,” says Hanson, who teaches History of Philadelphia at Penn and a course on oral history at Temple. “Having spent this long in academia, it’s hard not to want to leave at least one foot in after all that time and effort. But weird things happen in your 50s, and the success of this surprised me.”

Like so many home-grilling obsessions, Hanson’s began with a simple purchase of two smokers at Lowe’s that puffed side by side for several years at his home. With a steady flow of practice briskets, it’s no wonder he became one of the popular dads at potluck picnics for his kids’ sporting events. But Hanson’s fascination kept smoldering. And when he sprung for a big $4,000 Lang smoker on a trailer for his Chestnut Hill backyard in 2019, he knew he was ready to tackle what was next: “Once you take that step, you’ve got to use it.”

That next step was creation of North by Texas, a Tex-Mex barbecue concept — think brisket tacos, tortilla-wrapped hot links, queso-drizzled chicken, and deeply smoked carnitas — that made its first stop in 2019 at the PHS Beer Garden on South Street. That happened at the urging of the garden’s operator, restaurateur Stephen Simons, who’d tasted Hanson’s brisket at a house party three years ago.

“I took one bite and said, ‘What’s up with this barbecue?!’ ” said Simons, who co-owns seven restaurants (Khyber Pass, Cantina Los Caballitos, Royal Tavern, among others). “It just had the right texture and the perfect bark. ‘Oh, it’s a hobby,’ Scott said. But it was pretty clear, as he talked about emailing back and forth with [Austin barbecue legend] Aaron Franklin, that it was much more than a hobby.”

Simons generally discourages even the most accomplished amateur chefs from getting into the restaurant business.

“I always say, ‘Don’t do it!’ It’s low margins and high cost. And you’re going to be plunging a toilet on Saturday night in your good clothes instead of being out there with your family,” Simons said. “Scott is the only person I’ve ever encouraged, not only because his food is good, but because at this moment there’s a lower barrier of entry.”

Simons was referring to the culture of pop-ups that has proliferated in Philadelphia over the past few years, allowing hopefuls to test their menus with occasional events rather than the full-time commitment of a brick-and-mortar address.

Such opportunities have opened the door for Hanson to explore the possibilities without abandoning a career in which he’s already invested more than 20 years. The University of Texas and Columbia University grad began teaching at Philadelphia University (now Thomas Jefferson University) in 2002. A decade ago he became an adjunct associate history professor at Temple University and a history lecturer at the University of Pennsylvania, where he also directs the university’s Social Justice Research Academy summer program. His 2016 book, City of Gods, explored Flushing, Queens, as the most religiously diverse community in the world.

But a tenured position has eluded him to date, while his love of slow-smoked meats lingers. And the pandemic has only accelerated Hanson’s urge to connect with the world through his barbecue, catering briskets, ribs, carnitas, and chicken twice a month mostly to friends for pickup from his back porch table (where the cooler is also reliably stocked with Shiner Bock). It’s a time-intensive, primal ritual of meat-trimming, fire-stoking and 14-hour smoke sessions that, coincidentally, is also handy for grading papers.

The sensory experience also reconnects him to his Texas roots at a moment when home seems farther away than ever.

“I’ve always loved Tex-Mex food, and those flavors are what I miss most about Austin. But not being able to see my parents over the past year has only increased that nostalgia.”

The combination of barbecue and tacos, a distinct mash-up of two favorite Texas cuisines at Austin institutions like Valentina’s Tex-Mex BBQ, is what brought Hanson in contact with Cadence chef Jon Nodler. Hanson was seeking some of Cadence’s great corn tortillas for one of his pop-ups at Herman’s Coffee as an option to the flour tortillas that he’d been sourcing from Texas’ Flores, and now locally from excellent Nano’s Tortillas in South Philly.

Nodler was wowed by Hanson’s beef: “Quite frankly, it’s the best brisket I’ve tasted in Philadelphia. We cook smoked meats … and I was really impressed. The seasoning was spot on. The bark was great. The smoke level was really nice. And … the texture. It’s fatty and juicy, but the leaner parts didn’t eat dry.”

“Best barbecue Brisket in Philly” proclamations should be made cautiously in a town without much of a Texas barbecue tradition, although I was very thrilled this summer by funky Zig Zag BBQ in Kensington. It’s a worthy addition to stalwarts like Mike’s BBQ, the new Lucky Well on Spring Garden Street, and Smoke BBQ in Audubon.

But Hanson’s brisket, if he can maintain consistency, belongs near the top of that list. It’s lush and moist with generous marbling. And there’s such a sublime tenderness to the flesh, my teeth glided effortlessly through each thick and glistening slice, releasing a ghost of cuminy black pepper and a sweet smoke savor that only hours of patient monitoring can conjure. (The snappy-skinned Heavy Metal Sausage kielbasa wrapped in a Nano’s tortilla; and Hanson’s queso, a Monterey Jack-American flow flecked with hand-roasted chiles, were also standouts.)

But Nodler was just as impressed by Hanson’s commitment to sourcing ethically raised sustainable meats from local farms, a natural extension of Hanson’s work on social justice in academia.

Hanson acknowledges the irony of talking about minimizing environmental impact in a sooty business that relies on burning wood: “I’d like to rethink barbecue to support green practices like regenerative farming, ethically sourced meats, and other things to offset that carbon footprint.”

Those meats are more expensive than industrially raised cattle, but Hanson, who charges $18 for a half-pound brisket platter, argues barbecue should be valued higher than it has been traditionally given the time, labor and 50% loss of product during cooking: “Barbecue should be a special meal.”

Hanson and Nodler, whose restaurant is adept at whole-animal cooking, have also talked about smoking other cuts, like pork collar, beef cheeks, or tri-tip, for preparations like enchiladas to eventually supplement limited primary cuts like brisket and pork shoulder.

But their budding relationship is already symbiotic. The addition of NXTX’s Sunday barbecue can help Cadence in its aim to offer more accessible meal options to complement its modern American four-course tasting menu, says Nodler, while “also giving Scott the opportunity to dive in a little deeper than an occasional pop-up, to understand the labor and costs involved in a brick-and-mortar operation.”

A permanent location has hovered in Hanson’s mind continuously, though trepidation over the pandemic, space limitations, and time commitments have held him back.

Hanson is seeking a location where he can install a 1,000-gallon smoker in a covered shack like what’s common in Texas, an offset rig crafted from propane tanks that uses more wood than the gas-assisted vertical smokers typical in the Northeast. He just had his first consult with some well-known architects from Austin: “There’s no going back now.”

More crucially, he’s yet to determine if a bigger commitment to barbecue can coexist with his professorial pursuits — or replace them.

“I don’t know if I can do both, that remains to be seen,” says Hanson. “But even my dad, who was a businessman for many years, thinks maybe I should do [NXTX] full time. He said, ‘Look son, academia has been a hard road and hasn’t led to the job of your dreams yet.’ And, well, the barbecue seems to be doing amazingly well right now.”